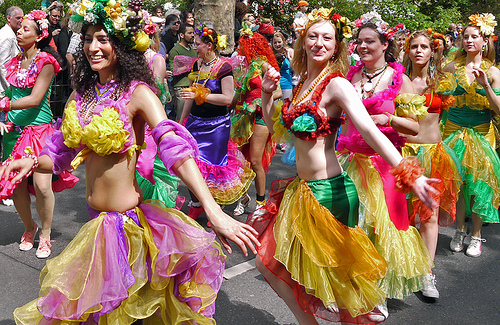 The Carnival in Berlin is a very important moment and one of the most fun for the city. It is an opportunity for all ethnic groups to showcase their artistic and musical qualities. The whole city is involved, regardless of race, gender and age.

Berlin Carnival of Cultures is probably the event that best represents the multi-ethnic nature of this city. In fact, the almost half a million Berliners who live in Kreuzberg are foreigners and this multi-ethnic district of the German capital is the place where the Karneval der Kulturen is mainly concentrated. The Festival was first introduced in 1993, specifically to create a city-wide event aimed at the meeting and the mutual understanding of different cultures, traditions and religions of Berlin’s citizens.

The event looks like the big European street parties as the Rotterdam’s Zomercarnaval or the Notting Hill Carnival in London’s homonymous district: lots of color and lots of music, costumes and revelry until late at night. The Carnival of Cultures, however, surpasses them all in size and duration as it recalls nearly 2 million tourists that add up to as many citizens during the four days – June 6 to 9 this year – of events that will culminate with the grand parade on Sunday 8th June, 2014. The previous Friday, May 30th, is a holiday and this also helps to create a festive expectation among adults and children alike.

And children, indeed, are the protagonists at Kreuzberg’s Kinderkarneval on Saturday, June 7. Their parade anticipates that of adults scheduled to take place the next day, and includes about 5,000 children in costume who will walk on the streets of Kreuzberg until Görlitzer Park, where the impressive Painting and figurative art Competition will be held. This year’s theme is: We are Gorillas! and all children up to 12 years of age can participate creating works of art with the technique they prefer: collage, painting, clay and objects, cloths, balloons, etc. At the end of the contest, 6 works will be selected and awarded by the jury to be photographed and used as promotional material for next year’s carnival. Also the parade will be Gorilla-inspired and we are all expecting great surprises.

The highlight of the Carnival of Cultures, however, is the Sunday Street Parade on June 8th starting at 12:30 on Hermannplatz an running through Gneisenaustraße, Hasenheide, and Neisenaustraße. More than 4,000 participants in their colorful costumes are expected to join the parade, to the delight of hundreds of thousands of people who will applaud them and take lots of photographs from the edge of the roads. The party will continue into the evening in the streets of the neighborhood and around Blücherplatz, the physical and logistical center of the Carnival.

All, or almost all, of the events are free, and participants are encouraged to use only recyclable plastic bottles and glasses and carry a bag where to put waste. There is no doubt that at the end of the event not even a kleenex will be found on the ground. You really should try and participate in the Karneval der Kulturen to bring home a little of this… green culture, too!

The complete program of events, shows and parades of floats is available in multiple languages on the official website of the event.