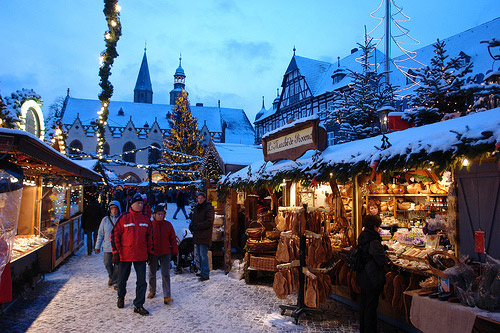 Christmas Markets in Germany are a tradition that is renewed every year. Always very colorful and full of handicrafts and food, German Christmas markets are among the most famous and oldest in Europe: indeed, the one in Dresden is known since 1400 while Munich earliest Christmas Market dates back to 1600. However, if you wish to escape the attractive chaos that reigns supreme in the Christmas markets held in Berlin or Hamburg, you can visit the classic Christmas appointment in smaller towns, less frequented by tourists, where the atmosphere is more intimate and where even the products on the stalls have lower prices.

For example, after visiting the Christmas market in Dresden, you can go to Meissen, about fifteen Km to the north along River Elbe. This small Saxonian town is famous for porcelain, Meissener Porzellan, and the Albrechtsburg Castle, which dates back to the fifteenth century. Near the cathedral, between November 25 and December 24, a lovely Meissner Weihnacht (Christmas market) is set up, with thirty stalls selling ceramics and woodcrafts. Don’t miss out on the Town Hall, which turns into a huge Advent calendar.

After being wandering in the dozens of Christmas markets in Berlin (there are several in every district of the city), you should also visit those in Potsdam, the imperial city declared World Heritage Site by Unesco. There are several markets here that open and close their stalls on different days. The Christmas Market in Blauer Lichterglanz, in the historical centre of Potsdam, where you will also enjoy a large ice rink, starts November 22 and lasts until December 27. The Romantic Christmas Market held in Krongut Bornstedt, set up within a farming village with stalls selling ceramics and glass crafts, starts December 1st and runs through the 26th. The Christmas Market of Sinterklaas, Potsdam’s Dutch Quarter, is dedicated to Santa Claus, and lasts only two days, December 8 and 9.

Some sixty kilometers north of Stuttgart, lies the pretty spa town of Bad Wimpfen. According to the ancient medieval tradition, this was an important market and commercial hub, so the Christmas market in Bad Wimpfen is one of the most characteristic in Germany, with characters in period costume, horse shows and attractions mainly concentrated in the centre, Kaiserpfalz.

Near Hamburg instead, Lüneburg’s Christmas Market drives you back to the times of the ancient cities of the Hanseatic League. Here, from November 28 to December 23, dozens of stalls are placed along the streets of the historical centre and near the Town Hall, in an atmosphere that enhances the old buildings of this town, famous for salt trade. Artisans and merchants display their glass and wrought iron crafts: check out the so-called salt lamps some of which can also be very heavy!

Hamelin is a town in Lower Saxony, some fifty kilometers away from Hanover. The town is renowned for its Renaissance art and culture, and boasts the presence of several Weser-style buildings dating back to the sixteenth and seventeenth centuries. It’s also the place where the ‘Pied Piper’ is set, the famous story written by the Brothers Grimm. The Christmas Market of Hamelin, from November 26 to December 23, is held in the market square: for the occasion, one of the houses facing the square is turned into a Advent large calendar.

In Sankt Wendel, Saarland town on the border with France and Luxembourg, the Christmas market, from 8 to 26 December, is set up around the Wendalinus Basilica. This is one of the most famous Christmas markets in Germany, with over 150 wooden stalls full of local products. Every day in the streets of Sankt Wendel you can enjoy the procession of the caravan of the Magi, with camels headed to the stable where the Holy Child was born.

In Bamberg, Bavaria, two markets are held, a classic one and one in medieval style. Just like in Naples, even in Bamberg there is a crib route with many different nativity scenes in one place. Bamberg’s Christmas Market is held from November 29 to December 23 on Maxplatz, with stalls selling toys, gingerbread and mulled wine.

In Quedlinburg, Saxony-Anhalt, a medieval city, a beautiful Christmas market is set up in old wooden buildings. Home to a castle-monastery, Quedlinburg is one of the best preserved medieval cities in Germany, a World Heritage site since 1994. The Christmas Market in Quedlinburg, from November 30 to December 23, is also characterized by the exhibition of ancient cribs and concerts with choirs.

In Goslar, Lower Saxony, the imperial city of the Holy Roman Empire, the Christmas market is held in the old town, which still retains its original oval shape: the imperial palace that dominates the city was the seat of emperors until the thirteenth century. The city is famous for its churches, the wooden houses, the copper and silver mine in Rammelsberg (must see) and its craft products. These are the protagonists of Goslar Christmas Market, which takes place from November 28 to December 30.